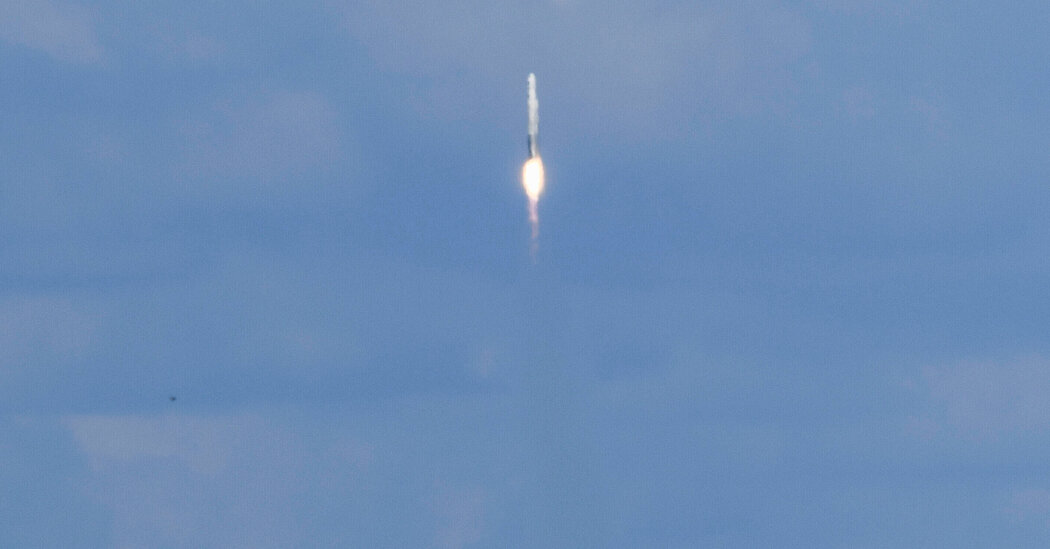 Four tiny NASA-funded satellites were lost on their way to space on Thursday after launching atop a rocket built by Astra Space, a small, publicly traded rocket start-up based in Alameda, Calif.

The satellites were small experimental devices called cubesats, and their loss may set back the research projects of the institutions that built them. But for Astra, the setback could be more significant. A successful flight on Thursday would have helped it step further into a growing cadre of launch start-ups jockeying to offer cheaper methods of lofting objects into space. And the company’s latest launch failure shows how difficult it is to join the club.

The company’s 3.3 rocket lifted off from a launchpad from Cape Canaveral, Fla., at 3 p.m. Eastern time, sparking cheers from a crowd of Astra employees streamed on a live video. But a few minutes after launch, as the rocket’s second stage booster was to break off for its trip deeper into orbit, onboard cameras showed the booster tumbling out of control.

“Unfortunately, we heard that an issue has been experienced during flight that prevented the delivery of our customer payloads to orbit today,” said Carolina Grossman, the director of product for Astra who was providing commentary during a company-sponsored livestream of the launch.

As the spinning spacecraft’s onboard camera captured glimpses of Earth and space, the stock market went through its own gyrations. Astra’s stock price fell so rapidly that the New York Stock Exchange halted trading of its shares for about 22 minutes, then halted it again shortly after trading resumed for about five minutes.

The botched mission comes nearly three months after the company reached orbit for the first time and about six years since its founding, in 2016, putting its campaign of test launches and string of failures under a quicker timeline than that of other launch companies.

“We experienced an issue in today’s flight,” Chris Kemp, Astra’s chief executive, said on Twitter. “I’m deeply sorry we were not able to deliver our customer’s payloads. I’m with the team looking at data, and we will provide more info as soon as we can.”

With Thursday’s launch for NASA, Astra has effectively started its launch business and was attempting to join more-established players in the field like SpaceX; Rocket Lab, the California-based company that has completed roughly two dozen launches from New Zealand since 2018; and Virgin Orbit, the company founded by Richard Branson that drops a rocket from a modified Boeing 747 jumbo jet to reach orbit.

The Astra flight was to be a key demonstration of the company’s goal to launch its rocket from more than one launchpad in the United States; all its earlier missions lifted off from Alaska. The flight also launched using new Federal Aviation Administration licensing procedures. The agency, which oversees launch safety on the ground, has sought in recent years to modernize its oversight duties amid a surge in spaceflight activity brought on by an array of new rocket companies.

Many more companies like Astra are aiming to reach orbit and kick off their own commercial satellite launch businesses.

Firefly Aerospace, a Texas-based start-up, conducted an unsuccessful test launch last September in California. Since then, its progress has been paralyzed by a U.S. foreign investment panel, which late last year expressed national security concerns over a Ukraine-linked investor that is being forced to sell its stake before the company can resume test launches.

Other companies are further from the launchpad. Relativity Space, a firm based in Long Beach, Calif., will rely on a small 3D-printed rocket called Terran 1, which aims to launch from Florida later this year. ABL Space Systems, another small-launch company based in El Segundo, Calif., is targeting mid-2022 for the launch of its RS1 rocket.

While NASA was Astra’s customer on Thursday, the U.S. national security apparatus has played a key role in shaping the ambitions of these small-launch firms. As Earth’s orbit becomes a battleground for military and geopolitical dominance, Astra and other companies seek the ability to launch on short notice from multiple potential sites. That would support a Pentagon goal of having the capability to launch spy satellites or other closely held military assets to space in emergencies.

Astra’s botched trip to orbit on Thursday highlights the daunting challenges for all these small companies. It reached space on its second launch test in late 2020, but failed to go into orbit. In its next test months later, the rocket waddled sideways on the launchpad before taking flight, failing again to go to orbit. The company finally reached orbit in November 2021, deploying a test payload from the U.S. Space Force.

“It’s incredibly difficult,” said Bradley Smith, NASA’s director of launch services who oversees the program that funded Astra’s mission on Saturday. “When a company publicly says they are 12 months from launch, they’re typically two and a half years away from getting to the pad. That’s what our metrics tell us.”

Bringing a rocket to commercial operations for a diverse landscape of customers is no easy task, and many companies have crafted new sources of revenue to stay afloat. Astra, Rocket Lab and Virgin Orbit have all gone public in the past year through mergers with special purpose acquisition companies, or SPACs. Astra reaped a cash boost of $500 million when it listed its stock. Virgin Orbit brought in $483 million.

“After we demonstrated our technology and got it to operation,” Dan Hart, Virgin Orbit’s chief executive, said of his company’s LauncherOne rocket, “it became clear that we needed to ramp, and we needed capital to make that happen.”

Mr. Hart added that going public through a SPAC opened up other opportunities. “It puts us in a place that can give us other tools and flexibility,” he said.

But going public during a rocket company’s infancy also adds more pressure for success at a time when engineers are still experimenting and learning about a rocket’s development and when failure is expected. Investors, however, may potentially view incidents on and off the launchpad as business risks, as the brief Thursday freeze of Astra’s stock implied.

While companies like Astra have barely gotten off the launchpad, they may be also be looking to diversify their business.

Caleb Henry, a launch industry analyst at Quilty Analytics, said that some of the companies that had gone public using SPACs see “a need to buy other companies in order to get anywhere close to the revenue projections that they have put out into the market.”

Mr. Kemp of Astra has said purchasing smaller companies that specialize in building high-tech spacecraft components will be critical to many small-launch companies’ growth after going public, a strategy he suggested was aimed at expanding business services.

Astra last year acquired Apollo Fusion, a company specializing in small, electric propulsion systems for satellites in space. Rocket Lab, which has many successful launches to date, made similar moves last year when it acquired three companies after going public in August, spending roughly $162 million in all.

Those recent efforts to expand revenue sources are partly a result of changing launch demand from satellite companies. Companies developing vast networks of thousands of internet-beaming satellites, like Amazon’s Kuiper project, seek more and larger rockets to boost large payloads of satellites to space at once. Some companies, like Relativity and Rocket Lab, plan to build larger rockets to tap into that demand.

“It’s a big audacious bet, but I think it’s the right one, because it’s very clear that’s where the market opportunity truly is,” Tim Ellis, Relativity’s chief executive, said of his company’s plan to start developing a larger rocket, Terran R, even before its first rocket launches.

ABL Space Systems could follow the trend in designing larger rockets. “We see the same sources of demand that are driving those decisions, and we expect to respond to it,” Dan Piemont, the company’s chief financial officer, said. The company’s first launch of its smaller rocket may be delayed from early 2022 after a test accident in January.

Astra has not revealed any plans for a larger rocket. But it has maintained a goal of being able to launch up to 1,102 pounds of satellites to low-Earth orbit in the future, more than double the capacity of its current rocket.

What Can Wordle Do for Our Brains?

Former Speaker of the