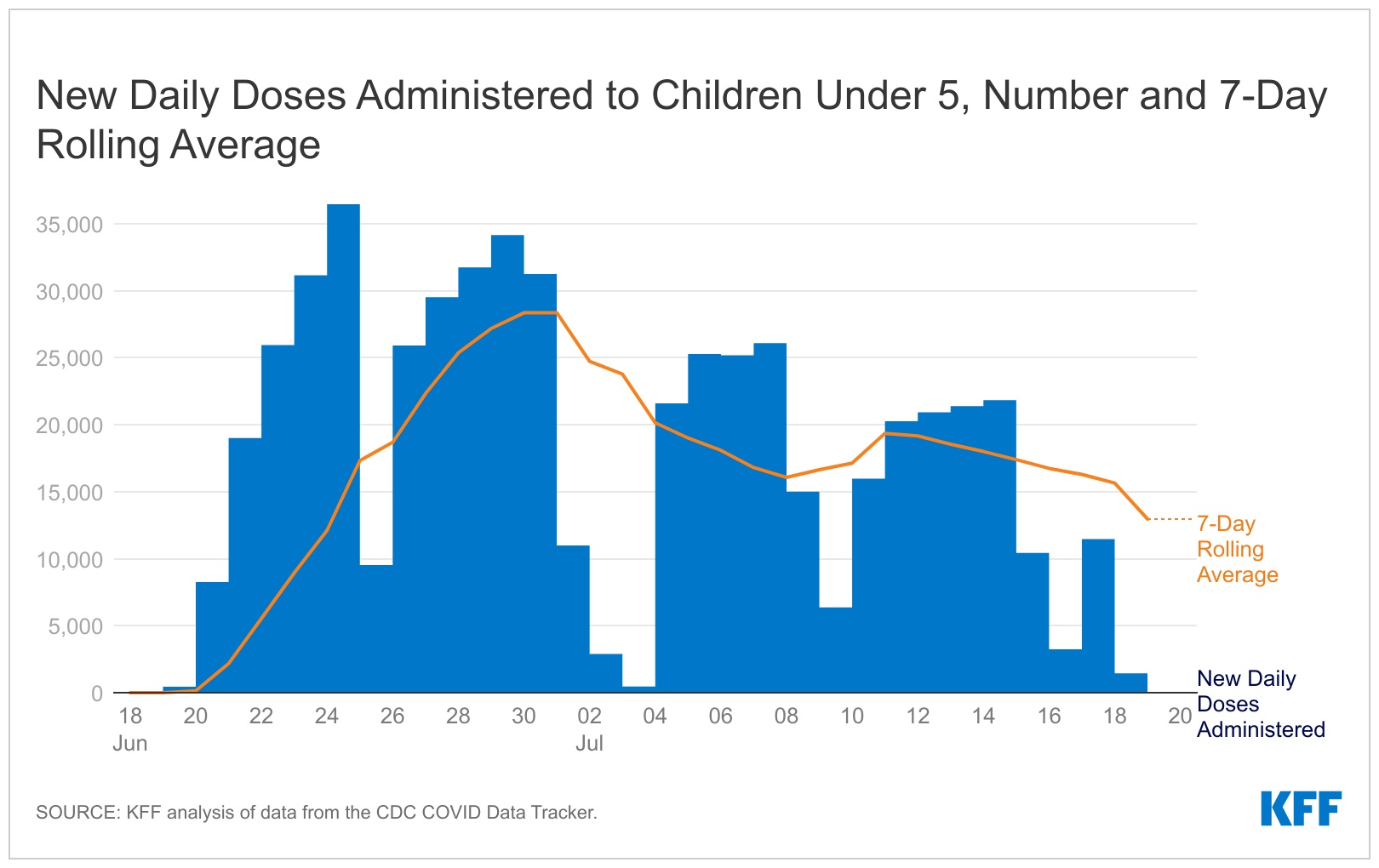 Children between the ages of 6 months and 5 years of age finally became eligible for COVID-19 vaccination in the U.S. on June 18, after the Director of the Centers for Disease Control and Prevention (CDC) recommended their use for this population, following emergency use authorization granted by the Food and Drug Administration. We recently wrote about some of the issues to consider in vaccinating young children, ranging from fewer access points and more reticence among their parents, compared to their 5-11 year-old counterparts. Here, we examine the status of vaccine uptake in this group, one month into their eligibility. Our analysis is based on data obtained from CDC’s Data Tracker on the number of first COVID-19 doses administered by age as of July 20, 2022 nationally and by jurisdiction (see methods below for more information). Overall, we find that vaccination has already peaked in the youngest age group, and is far below where 5-11 year-olds (who became eligible in November of last year) were at this point in their eligibility:

As of July 20, approximately 544,000 children under the age of 5 had received at least one COVID-19 vaccine dose. This represents 2.8% of the approximately 19 million children in this age group. At a similar point in their vaccine roll-out, more than 5.3 million children ages 5-11 (18.5% of 5-11 year-olds) had received their first dose. (See Figure 1).
Vaccinations peaked among those under 5 about two-weeks into their eligibility, even before the July 4 holiday. After a quick rise in vaccinations soon after they became eligible, the rate of vaccination (as measured by the 7-day rolling average of new doses administered) peaked at just over 28,000 on July 1. It then began to decrease and was about 13,000 on July 20. (See Figure 2).
This peak is significantly below where their 5-11 counterparts were at a similar stage. While vaccinations also peaked among 5-11 year-olds about two-weeks into their eligibility, they peaked at 271,000 average daily doses; at that point, almost 2.7 million 5-11 year-olds, or 9.3% of the age group, had received their first dose. This compares to about 283,000 children under age 5, or 1.4%, at their July 1 peak. (See Figure 1).
While still in the early stage, there is already significant variation by jurisdiction. The highest share of children under age 5 who have received their first COVID-19 vaccine dose is in Washington DC (14.4%) followed by Vermont (10.3%) and Massachusetts (7.2%). The top 10 states have vaccinated 4.5% or more of their under 5 year-olds with their first dose. The bottom 10 states have vaccinated 1% or fewer children under age 5; Mississippi has vaccinated the lowest share (0.4%), followed by Alabama (0.6%). (See Table 1).

These data suggest that achieving vaccination coverage of the youngest age group will likely take some time, may require more intensive and ongoing efforts, and may lag behind even their slightly older peers (even among 5-11 year-olds, just 30% have been fully vaccinated, eight months since they became eligible; vaccine coverage jumps to 60% of 12-17 years-olds and 77% of those 18 and older). This slow uptake likely reflects a range of factors. In addition to there being fewer access points for those under the age of 5, our prior COVID-19 Vaccine Monitor Surveys, fielded before children under 5 became eligible for vaccination, found that most parents were cautious about getting their young children vaccinated; soon-to-be released survey data will show that this caution has continued even after the CDC recommended vaccination for those 6 months and older. As a result, many parents may not encounter an offer of a vaccine until they go in for a routine visit to a pediatrician at some point in the year. More broadly, the sense of COVID-19 as an emergency has diminished among the public. Still, the country is in the midst of another COVID wave, due to the latest Omicron variant, and while children generally fare much better than adults if they do get COVID-19, some do get quite sick, suffer longer-term health issues, and even die from the disease. Vaccination against COVID-19 is safe and effective, can protect them from illness, and minimize disruptions to childcare, camp, school, and other needed services.

National-level data from CDC were used to calculate the cumulative number of children under 5 who had received their first dose, as well as daily changes in the number receiving their first dose and the seven-day rolling average of new doses administered, as of July 20. This dataset was also used to calculate comparative data for those ages 5-11 and 12-17. National-level totals include data from the 50 states, DC, federal entities, territories, and associated jurisdictions. Jurisdictional-level data from CDC were used to obtain the number and share of those under 5 who had received their first vaccine dose for the 50 states and DC, as of July 20.

A Look at the Economic Effects of the Pandemic for Children